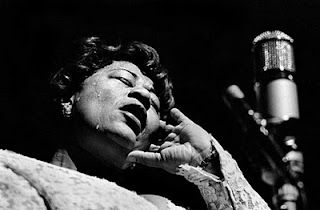 What a voice. What a picture. Ok, so I love Ella almost as much as the next guy. But I have a problem with Ella. She is an awesome singer but sometimes she just has no...soul. Not funky soul, but the soul that just makes you feel songs.
And I don't always think this was Ella's fault. She loved singing, but she often bowed to company policy so to speak.
Overwrought strings and bad song choices plagued her often late in her career.

But when she was on...well she was untouchable. And the best thing about this recording is it reaffirms just that. This is Ella enjoying herself, no studio dude off in the corner, no tweaking the tapes, just Ella and band.

This here appears to be some sort of bootleg I would suppose..I don't recall if personnel was listed on the sleeve, or dates as I can't seem to locate the damn record. Good thing I found this tucked away on the end of a disc. (Damnit - where is that record?)

This was released on Alto records, I'm thinking sometime in the early 50's. Ella is paired with Ray Brown but I don't get the impression that this is one of their early sessions.

How about that? Thanks Luis!

Hey Hook, had just commented on my blog about this subject and here you are to set me straight!

I used Ella as an example of my finding it hard to connect to many jazz vocalists due to a lack of - for a better term - "soul." The type of "soul" you mention is pretty much what I was trying to say but you did a better job.

Especially thanks for this boot, though! It's wonderful to hear Ella's soul shine through on this one, especially on the last half of side 1. While scatting on those two tracks, she goes beyond the technical dexterity and precision for which she is known and swings with a feeling that was hard to come by when listening to her in later years.

However, by Hamp's "Flying Home" she seems to have run out of a bit of steam. Still hitting the notes but that special something from deep inside had dissipated quite a bit.

Thanks to to Luis for the recording info!

No one knows the Royal Roost like Luis. It used to be your nickname at one point wasn't it?

Thanks for the recordings AND the information.