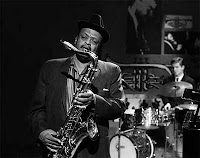 Some people have elevated Ben Webster to godhead status. Well, he is good. And those Blanton-Webster sessions are immortal. Worth every bit of praise the receive, but they are still essentially Duke's glory.

How was Webster when he struck out on his own? Well I have not dug too deeply because the few mainstream releases I have encountered were, while not bad, but unexciting at best.

That would however exclude the session he made with Tatum, which is outstanding.

However these two odd sessions that I am sharing here go a long way to convincing that once again I may not know what the hell I am talking about. Good stuff these...

from Circle Records 1982 reissue of a Feb. 8, 1944 session for World Transcriptions.
originally released only on 16" platter for radio station use. CLP-41; in original mono

Tracks 9-14 are from a Doctor Jazz reissue of a record that was originally released on Bob Thiele Music label. It was titled The Big Three and contained sessions by Wester, as well as Hawkins and Young. Their sessions will be showcased later I would assume.
Webster are from two sessions in May 1944, the 3rd* and 15th. Both have 52nd St. written all over them.

For the 15th, it was Webster, DeArago, Simmons, and Catlett with
Al Haig - piano

You find them both here
Posted by Hookfinger at 11:23 PM

I can't wait to dive into these. There's very little Webster that I haven't heard (some of the European stuff) so this is going to be a real treat. I'll try to get back after hearing it.

Webster at his best (and thats a lot of recordings) can stand with the giants.

jose luis - relax dude. Please remember this blog is a labor of love composed in a small music room often accompanied by booze and other condiments. You just have to muddle through the mistakes. And a bit of thanks goes a long way.

Hookfinger, this record is really unknown to me, I can't imagine how do you find this one.

It's a beautiful Webster records, so ... many thanks for this gem.