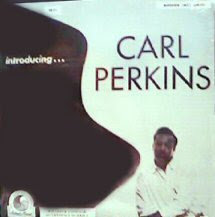 Can there be anything more tragic that the opening lines of the liner notes for this lp? "Carl Perkins was born in Indianapolis on August 16, 1928 and died unglamourously in March 1958 aged 29."
A revered sideman for Curtis Counce, Dexter Gordon, Art Pepper and Harold Land, this is his only recording in the classic trio format.
You know lots of people overcome lots of difficulties but this dude was stricken by polio - a disease unheard of these days - and still played the piano even though he had to keep his left arm parallel to the keyboard. Rather than let this hinder him, he used his elbow to strike bass notes that no one else could even fathom reaching.

1984 reissue.
Credits in comments thanks to Mel
Posted by Hookfinger at 8:18 PM