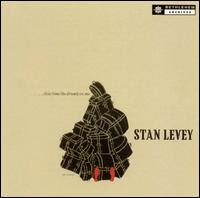 As a bonus tonight I am also putting up this little gem - credited to Stan Levey but the star here is Dexter Gordon, who recorded rarely in the 50's due to his addiction.
I love the fact that this lp starts off with a short drum intro and finishes off with a long one. Not so long as to be uninteresting and of course, including that last flurry of activity from all the participants.

Now lets see how this works. The original 1955 lp is next to impossible to find. As far as I know it was not reissued again until 1978, 23 years after the original pressing, and the copy from which this was recorded. It is now 2009, making my copy 31 years old. One would think that if someone saw fit to reissue a record after 20+ years, that a copy of that record over 30 years later would have some value other than artistic. Sadly the digital revolution would make this point moot.

Or not. Because no one seems fit to keep this little gem in print. And it really is about the art, isn't it?

Thanks for this offering. Actually, this music has been reissued several times on LP and CD. A closer look at the album cover you posted reveals the correct title of the original recording: "This Time The Drum's On Me" (Bethlehem BCP37). I assume your copy is the Affinity reissue that was renamed "Stanley The Steamer." The most recent reissues of "TTTDOM" have been Japanese. Rhino's 2001 remastered version is quite good, if you can find it.

Well you learn something new everyday. thanks for the info.

thanks for this gem - and all the other gems you've posted! very much appreciated!