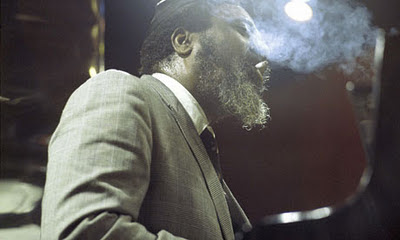 This is not a proper lp but a recording of a show from NPR. It may not be of interest to everyone, but what the hell, it is cool and it's less than an hour long. You can listen to it while doing the dishes and folding the clothes. Also a nice accompaniment to cooking dinner or dusting the apartment. Kinda pointless while running the hoover though.

While probably offering no new insight to old fans, it is nice to hear some of his contemporaries speak of him. Hosted by Nancy Wilson, the was released as part of a Jazz Profiles series.

Monk passed away 30 years ago today. Which means I've been a fan for over 35 years. Damn time flies.While many many pianists have appeared on the scene since then, I cannot think of one who surpasses Monk's legacy.

I first posted this two years ago today.

Yeah all tru about MOnk, one helle of a pianoplayer an composer, long live Monk!!

I agree
Monk is the biggest one
thanks and best wishes