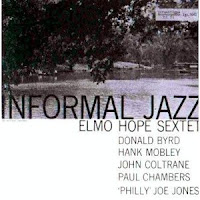 A nice hard bop date that doesn't seem to make its way around much. Granted it didn't retain this title long and was reissued several times, under eitherTrane's moniker or Mobley's and often titled Two Tenors, which unfortunately detracts from the real leader on this date.

At the time this date was recorded Hope was still struggling for recognition. I'm kinda surprised he managed to surround himself with such fine players.

I like Elmo Hope but I think that there is a good reason he remains basically unknown outside of jazz circles. Just for the record I feel the same way about Hank Mobley. And to an extent, Donald Byrd. All have released fine, fine records, but not a consistently long line of them.

During this time so many players were playing on each others dates, always sharing the spotlight, that I have I come to the conclusion that on many of these recordings that the whole is greater than the sum of its parts. This is a perfect example.

but actually taken from a 1976 Milestone reissue.
Posted by Hookfinger at 4:20 AM

Well, he was a fine pianist out of the Powell school, a little less percussive and not the creative force that Bud was, but his real talent was as a composer of unusual and very difficult originals.

Elmo Hope is one of the true originals (like Monk,Bud,Herbie Nichols,Phineas Newborn his playing was off kilter and in the pocket and he could write great original tune).But this is not as good as "Mediations" or other output.it is the old joke "what's the difference between a Blue Note and Prestige session" Answer "Five days of paid practice and time to work out the charts".Bob Weinstock was a cheap bastard who could have made some great records that ended up as "just show and play" blowing sessions.Pity as it was the 50's label.

Thanks from the Baron

Thanks baron...always nice to see you around.