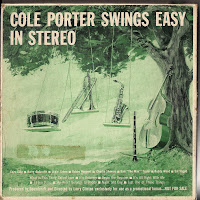 This was too cool to just leave on the Cole Porter blog.

This is actually one of the cooler things I have nailed down. A reel-to reel tape that professes to be "Produced by Soundcraft and Directed by Larry Clinton exclusively for use as a promotional bonus - NOT FOR SALE"

While not necessarily a huge fan of the assembled musicians, several have done some interesting stuff over the years. Thrown together here though they form a tight little unit. The music and performance is exactly why I like to champion pre bop jazz sometimes. To borrow a phrase I heard recently, it swings like a gate. Even though I have never heard the names of the pianist or the clarinetist outside if these sessions, they manage to hold their own with the journeymen.

This session was assembled as part of a special series Soundcraft Magnetic Tape was releasing to showboat their product. And in wonderful new stereo as well.

Cole Porter Swings Easy In Stereo
1. What Is This Thing Called Love?
2. It's Delovely
3. Begin The Beguine
4. It's All Right With Me
5. I Love Paris
6. My Heart Belongs To Daddy
7. Night And Day
8. Just One Of Those Things

From what I can tell this was recorded in 1957 or 58
Soundcraft - no matrix number assigned.
Posted by Hookfinger at 7:15 PM

According to Mr Lord these tracks were issued on CD as "We Dig Cole!" by Charlie Shavers on Jass CD-5

Clarinet/Piano: with names like "Weed" and "Yage", I would guess that they are thinly-veiled pseudonyms, derived from their favorite pastimes. Most likely, they were, like the other musicians, stars who happened to be contractually unable to appear on this record, and so disguised their appearance through a smokey credit.

@rdnzl - I thought exactly as you did, with names like that. The funy part is they actually even made up fake little bios for them. Wonder just who they really are.

Buddy Weed and Sol Yaged - strange as it might seem are their actual names.
Baron

Sol Yaged - he advised on the Benny Goodman story - may have played.

Looks like you've a good 'un here HF ... never been issued before on record until Jass records ... so it's as it says on the box - promotional use for Soundcraft.

Fresh Sounds have now issued it with tracks from other sessions.

Weed and Yaged were both swing veterans with tons of credits, comparable to the rest of the band.

come on: the names are no pseudonyms! they are real: sol yaged born 1922, recorded with jack teagarden, chubby jackson, keith brasselle. buddy weed, born in 1918, recorded with a lot of the name bands in the 40´s. look at your discographies!!

p.s.: oh, i forget to thank you for this great, swinging recording!! real fine music!!

Ok guys, ok. So they are not pseudonyms. Wish I could sport a name like Buddy Weed. And we know I'm not much on discographies...it's all about the tunes for me. I really do appreciate the info though.

Great sound!
Many thanks (again)!

Many thanks for this one. Fine music played by great musicians.