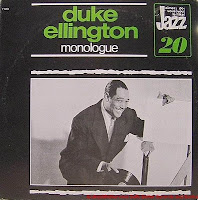 More of the indomitable Duke. Nice stuff from a powerful time. 11 of the 16 tracks are from 1947, the other 5 from '51. While these bands don't always contain Ellington's most famous players, there are no slouches in this bunch and plenty that would achieve fame with Duke in the ensuing years.
I see a smattering of these songs elsewhere but I would have to do research to see if they are the same recordings. I rarely indulge in research. Sometimes I indulge in a buzz and read the credits. I have not read enough credits to be considered an authority but I know that in my bones these are fine Duke Ellington songs. Some swing like a mother, while others paint that panorama that only Duke can create. Sometimes I wonder if these versions were released elsewhere, but not often.

If you are truly intent on more complete credits let me know and I will see what I can do.

Thank you very much, Hook

thanks for this -- I'm not as familiar with this era of Ellingtonia, so it's always nice to fill in a few gaps. Thank you!

I bought as many of these CBS French label titles as I could afford when I first saw these in US record racks many many years ago. I do not have this one, so thank you for posting it. Most of the track lists for the ones I have seem to be randomly culled from available 78 rpm sources, but I could be wrong. thanks again.