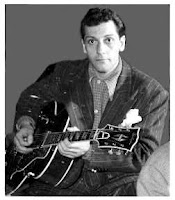 Without fail, the best thing about running this blog the last few years has been reaching out to other fans about the music I love so much. Consequently I have met some great folk and learned about so much music they I may have missed on my own.
Bill DeArango falls into this category completely. While seeing in retrospect that I should have been aware of him, I was not. That is until a fan of my blog dropped this short set in my inbox and asked if I would be gracious enough to post it. I listened and I enjoyed it immensely. Certain that it would make the blog, i needed to do a little research first.

He is what the donor had to say to me... " hi hookfinger, i have a tape of bill de arango from 1992 in a club in cleveland called the barkin spider a friend of mine knew bill and use to go and see him play he asked bill if he could record him and bill said yes. bill use to live in cleveland and used to play this club once a month. well anyway if interested let me know and i will send it to you."
Not much to go on so now I give you details I located on Classic Jazz Guitar site...
"Bill DeArango (1921-2005), played with some of the world's great jazz musicians. The list reads like a who's who in jazz from the 1940's. Ben Webster, Charlie Ventura, Coleman Hawkins, Red Norvo, Dizzy Gillespie and others. By 1950 this player had laid down some of the most inventive and creative jazz guitar solos known at that time. And, all this creative output was accomplished playing in the shadows of the great horn players of that period in New York.

DeArango left New York and the national jazz scene at the close of the forties and made his home in Cleveland, Ohio. He surfaced again in 1954 with a recording entitled DeArango on which he displayed the same great playing that set him apart from other guitarists of that time.

Bill DeArango was active in the music business through the 1990s. He owned a music store in Cleveland for many years and participated in the whole music scene in Cleveland from jazz to rock. He appeared on some rock and free jazz recordings from the 1970's and 1980's. He was often billed at places like the Barking Spider Tavern in Cleveland.

In 1993, DeArango made a free jazz CD with Joe Lavano called Anything Went. This CD also contained some standards that, along with the free jazz forms, demonstrated the amazing musical range of this musician.

I've done my best to identify the songs properly.

1. You and The Night and The Music
2. unknown
3. Summertime
4. Yesterdays
5. Lullabye of The Leaves
6. Autumn Leaves
No other info was supplied.

Well there you have, Phil. Sorry it took so long to get this wonderful set up. I am honored that you share it with us.
If you people like this make sure to thank Phil in the comments.

Posted by Hookfinger at 5:42 PM

With a resume like that, DeArango is definitely worth checking out. Thanks for the heads up!

Thanks flat...somehow things got skewed while importing...corrected on the front page now.

I'm very grateful for this, thanks a lot.

This turned up two days later at jazzy62's place. No one there could identify track 2 either. I have just listened to it and can't recognize it either.

Absolutely wonderful stuff. I first heard him on some of the old Dizzy recordings.The Unknown track is obviously 'God Rest Ye Merry Gentlemen" with a little touch of Wes,60's psychedelic aka Jefferson Airplane,middle eastern etc.
Just another great musician, without popular recognition, not even in the jazz field. There are millions out there we've never even heard. That's the way of the world!

Yes. At 7:26 he finally plays a melody fragment. Before that the playing is quite free. I think he purposely keeps you guessing till the end :-)

(it's so hard to leave a comment here.
I always have to try many times)

thank you very much

My first guitar teacher at his store in University Heights, Ohio. Great and very patient teacher. The highlights were when he would pull the EDS-1275 from the display case and wail away in his store. Great times!